Busy private developer Pellicano has gone back to its roots, kicking off work on a boutique $46 million build-to-rent project at Brunswick, one of inner-city Melbourne’s best-known hipster suburbs.

On Albion Street and just a short walk from a nearby station, the 70-apartment project designed by Six Degrees Architects taps into the suburb’s vibe with a communal rooftop with barbecues, a Mediterranean-style herb garden and orchard as well as ground floor space allocated to food and beverage operators. 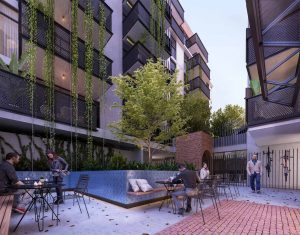 An artist’s impression of Solarino House in Melbourne’s Brunswick.

Pellicano’s swing away from the build-to-sell model typically pursued by developers toward a long-hold rental asset comes as the emerging build-to-rent model gains momentum in the housing sector.

For Nando Pellicano, the family-owned company’s managing director, the move makes sense for the current market conditions. It is also a return to familiar territory for the company which in the early 1970s built a collection of 24 town homes it still owns and manages.

Mr Pellicano likens the decision to hold the Brunswick residential project rather than sell, to the same calculation the company makes for its commercial and industrial developments.

“We always buy it with flexibility of going either way and the market decides.”

A crucial element in the business case for a BTR project was the local council’s backing to include fewer carparks in the project. A portion of the carparks remaining will also be reserved for share cars, likely to be more popular among younger, less car-dependent residents.

“If we had to build all those extra carparks it would have been very borderline of the BTR was going to work or not,” Mr Pellicano said.

“The fact that we were able to pull out $1.5 million in costs was probably the tipping point to make it viable.”

The Brunswick project, to be called Solarino House, will come under the Pellicano Living platform, which the company set up to manage apartments across its developments for investors, including services such as parcel management, dry cleaning, apartment cleaning, handyman services, bike rentals and community events.

Pellicano has another eight projects – a $700 million portfolio of 1400 apartments – earmarked as potential BTR projects. Expectations are rising for the niche BTR sector. UBS has calculated as many as 10,000 apartments could be completed annually with a few years.

Even so, Pellicano is not banking on exiting its investment in the short term by selling the Brunswick project to the sort of major institutional player which typically hold BTR assets. Small tweaks in design mean Pellicano could one day sell down units individually if the market for that emerges. 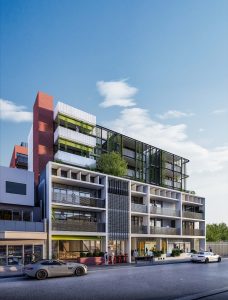 The 70-apartment project, designed by 6-Degrees Architects, will comprise one, two and three bedroom apartments.

“You need the flexibility for both,” Mr Pellicano said.

“At the moment the sector hasn’t matured enough where there are not that many one-line buyers. If, in five years’ time it has matured and there are institutional one line buyers around like there are in the rest of the world, then you can sell in one line.

“We will spend a little bit of extra money on design and construction to allow that [to] happen so that we have the flexibility in the future to either sell in one line or sell down individually.”