Melbourne’s next A-grade CBD office building makes a virtue out of necessity, by responding to height and over-shadowing controls to create smaller workspaces for a growing market of creative-industry tenants.

Family-owned groups Perri Projects and Pellicano will start construction next year on the “boutique” 20-level mixed-use office tower at 17 Bennetts Lane after getting City of Melbourne approval for the building on the 1543sq m site Perri Projects bought in 2017 for $26.1 million. 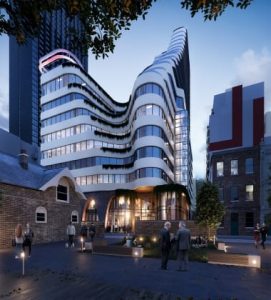 The design for the office tower at 17 Bennetts Lane was dictated by building requirements.

The 12,000sq m FJMT-designed tower, which will include up to 1600sq m in space for food and beverage retail facilities, will offer floor plates of 1200sq m for larger tenants and smaller tenancies in a tapered design.

“A lot of people are renting office space in a very big, huge glass-box office tower, trying to retrofit it to look like a warehouse,” said Perri Projects managing director David Scalzo.

“What we wanted to do was take the concept of what people were trying to achieve and make it inherent in the design fabric from the start.”

But the shape of the building was largely forced by height and overshadowing curbs of the site – next to the former Bennett’s Lane jazz club at Number 25 – cobbled together out of seven neighbouring properties by previous owner John Conroy over a reported 31 years.

The site on the corner of Bennett’s Lane and Little Lonsdale Street also faces a public plaza outside Charter Hall’s Wesley Place complex.

“The site had some challenges in getting the right design outcome,” Mr Scalzo said. “It’s got a number of street frontages but different streets and laneways have different considerations in terms of how you approach them from a building massing perspective.”

The development, which Perri Projects and joint venture partner Pellicano – the diversified property group of the one-time Financial Review Rich Lister Pellicano family – will hold long term, will have an end value of $170 million.

Mr Scalzo said he didn’t have a clear construction cost as the building’s design had changed during the City of Melbourne planning process.

No builder has yet been appointed and while the developers intend to seek construction finance from banks ANZ and NAB, they would only finalise details early next year, after launching the marketing campaign for the building, he said.