Melburnians could soon hit the surf before work at a state-of-art water park that would be the biggest of its kind in the southern hemisphere. See the plans. New video and images. 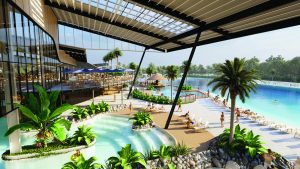 Surf’s up in Dingley

Melburnians would have an all-new surf break by 2024 under a revised proposal for a state-of-the-art water park in the city’s southeast.

Plans for the largest indoor-outdoor venue of its kind in the southern hemisphere have been bolstered with new technology from Canada – generating waves up to 1.8m every 10 seconds in a beach style pool – that Melbourne could be just the second city in the world to try out.

The tweak to the plans comes as the wealthy Pellicano family behind the $100m project reveals their super-sized SurfnPlay Aqua Park is moving closer to reality, with just Kingston City Council to sign off on it after recent green lights from VicRoads and Melbourne Water. 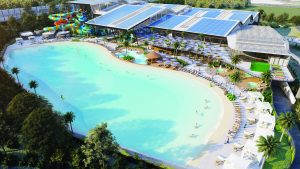 The development’s expansive outdoor component will be heavily landscaped

If approved, the 4ha Dingley Village development will have 1.82ha of indoor pools and recreation, as well as about 1.3 ha outside – including a new beach.

Thrillseekers will also be able to hang 10 on an indoor wave with room for four surfers at once, water-jet powered slides that propel visitors uphill and video-game-like-tunnel rides where kids can try for high-scores. More relaxing aspects include a 250m ‘lazy river’

The initial proposal was revealed in March by the Herald Sun in March 2019.

After addressing a range of request from government and environmental agencies, the only hurdles remaining are council approval and public consultation.

Pellicano manager Nando Pellicano said only Paris was poised to beat Melbourne to the Endless Surf technology that was part of the revised plans, which has also boosted landscape by 25 per cent and doubled the size of the rooftop solar farm to 5500sqm.

Mr Pellicano said his firm intended to start construction within 12 months of approval and have visitors making a splash two years later.

“Our business model is very much on local Melburnians,” Mr Pellicano said.

“Keen surfers can go before and after work. And we will work with local schools to teach kids to surf with no sharks or undercurrents.”

“Who would of thought in the Southeast of Melbourne you could contemplate going for a surf before work.”

It would join the Urbansurf water park in Tullamarine on the list of inland surf breaks available in the city.

It is also hoped the attraction will help lure tourists to Melbourne instead of major attractions on the Gold Coast.

The revisions have also reduced the site’s building mass by 30 per cent to address early council concerns and make the project more environmentally friendly. 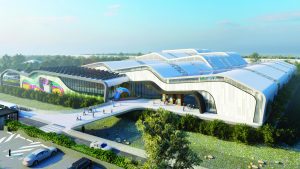 The water park is also expected to play a part in the city’s recovery from COVID-19 with construction to generate about 500 jobs, including those putting together the attractions once the materials are shipped in from WhiteWater West in Canada.

Initial plans for the water park had included contributors from restaurants and hospitality dynasty the Zagame family, but they have since pulled out citing COVID-19 issues.